On 20 May 2022, SUPEERA’s webinar on Green Hydrogen & Clean Energy Research took place online. The session gathered more than 50 participants including key EU policy makers, representatives of industry, civil society and research and offered the chance for relevant reflections on the role of hydrogen in the Clean Energy Transition, in particular in light of the updated REPowerEU Plan.

Key outcomes of the discussion

The session was introduced by EERA Senior Policy Officer Rosita Zilli with a series of ice-breaking questions aiming at getting to know the audience’s background and expectations. The majority of the attending participants that answered the questions had a background in either Research or Academia and was interested in gathering in-depth R&I challenges and industrial opportunities connected to the topic of the webinar.

The following Panel Discussion was moderated by EERA Secretary General Adel El Gammal. The first guest, Luca Polizzi, also started its presentation with a series of introductory questions, with the goal of understanding what the audience’s perception of hydrogen was. It was interestingly noticed, as an example, that more than half of the participants that took part in the questions did not think that hydrogen was a truly green solution. Consequently, biomethane, biofuels and ammonia were indicated as viable alternatives to hydrogen by the attendees. 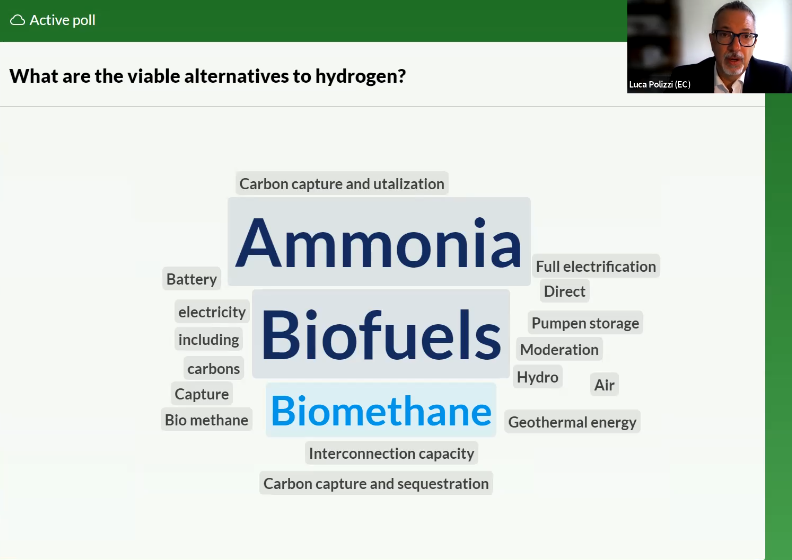 The expert then proceeded to illustrate the European hydrogen eco-system strategy, clarifying that the Commission’s intention is to focus solely on renewable hydrogen, thus green hydrogen. Polizzi shared that the Commission’s long-term vision is to have renewable hydrogen deployed at a large scale across all sectors starting from 2030. After that, he involved once again participants, spurring a reflection on the financial side of hydrogen deployment and in which ways the needed infrastructure could be funded. 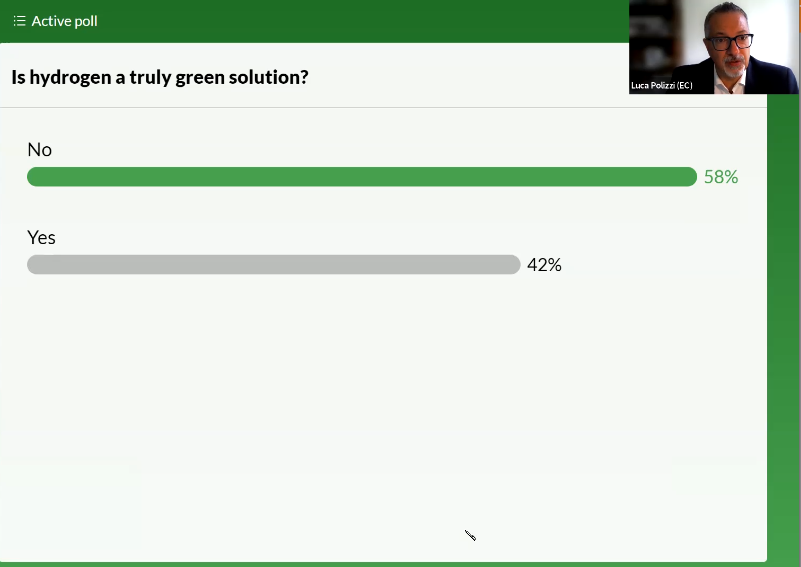 Polizzi also gave a brief presentation on the hydrogen transition, with a focus on the just-launched REPowerEU Plan, and on the current and future role of hydrogen valleys in Europe. Finally, he was asked specific questions on the international framing for this initiative, and how to keep EU leadership in this sector. Polizzi finally highlighted that the EU is committed to keeping its leadership role in hydrogen production.

The second speaker, Stephen McPhail, gave a presentation focusing on the EERA Joint Programme Fuel Cells and Hydrogen (JP FCH), indicating its scope, missions and key targets. In his presentation, he highlighted that the biggest challenge in exploring the role of hydrogen in our society is to preserve research freedom while maintaining scientific acumen and upholding unbiased investigation. He also shared that the JP FCH ambition is to continue as an independent group of scientists, fostering interaction with other EERA Joint Programmes, providing ad-hoc contributions to research strategies and work programmes. McPhail concluded his presentation by confronting the audience with a question regarding the obstacles for the achievement of the EU Hydrogen strategic targets. The participants mostly confirmed that they see the production of hydrogen as the main bottleneck for the achievement of these goals.

The last guest, Gunhild A. Reigstad, shared with the audience the results and experience of Hydrogen4EU, a cross-sectoral research project started in 2020 aiming to concretely assess the potential contribution of low-carbon and renewable hydrogen in reaching the European energy transition goals. The expert explained that the main findings of the project identify transport and industry as triggering the largest hydrogen demand in the future. On hydrogen production, the research showed that production from renewable sources and natural gas are complementary in terms of building up and expanding the market. Finally, she stressed the importance of more efficient tools for integrated assessment.

On a final note, a brief panel session was held between the experts to answer the questions from the audience. Some areas that were addressed related to the challenges to the transport of hydrogen, the competition between generating green power and generating green hydrogen, and the role of solar energy in kerosene production.

The recording of the webinar is available at this link, while you can find the presentations here.